"I mix your blood with coal." Understand the Ukrainian East »

In 2014, completely different passengers began to travel on the Ukrainian railway. Some went to defend the country, some to help rebuild cities, and some were forced to leave their homes and return to their native places only from time to time. At the end of 2016, Oleksandr Mykhed went on a trip to six cities of Donetsk and Luhansk regions, researching the modern life of cities, as well as stories hidden in the archives. However, the most important thing for the author is to hear the voices of locals. Excavating layers of history and layers of myths, the writer tells the amazing history of the East, which was tried to curb British and Belgian investors, imperial and Soviet rulers.

Nash Format Publishing, founded in 2006, is a leader of business and worldview literature. Nash Format publishes high-quality nonfiction in Ukrainian and in 2020 founded the Children's Editorial Office to create books for Ukrainian children with which they will grow up smart and talented. The goal is to form a new Ukrainian elite and change the scale of readers' thinking. Among the published books: works of Nobel and Pulitzer Prize winners, bestsellers of The New York Times and The Economist. 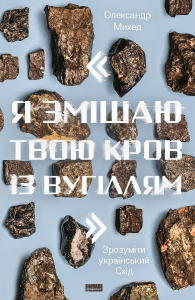